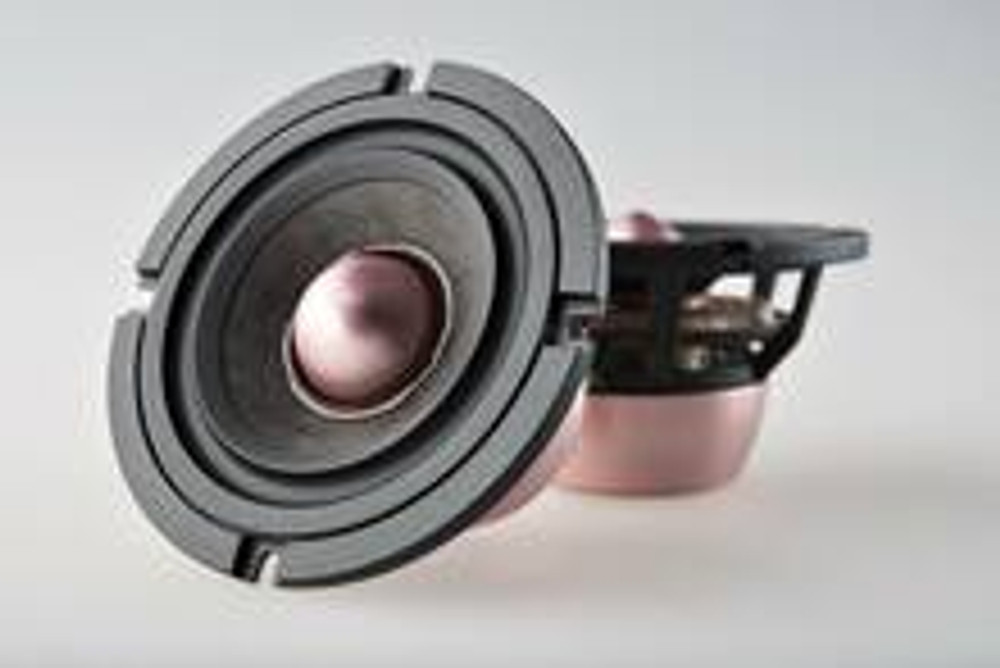 Driver specifications are available by following this link.

The Legatia L2SE is a 68mm (2.7-inch) “small format” wide-bandwidth midrange/full-range driver to complement both two-way and three-way system designs, where a point-source midrange and/or full-range driver is required. The following are the L2SE’s design attributes:

The basket of the L2SE is similar in design, function, and mounting diameter as the Unity U2 for easy upgrade potential; the U2 and L2SE are interchangeable in mounting topology. The basket is a high-quality cast aluminum design and contains a 68mm flange providing for the mounting of the driver via four screw holes (the use of 2mm cap head screws is ideal). The overall dimensions of the driver are very amenable for use in the car audio environment, and in locations typical of the standard “2-inch” driver, or in custom locations at the discretion of the end-user, boasting a depth of just 34mm (1.34-inch). The basket features large openings behind the cone to eliminate chuffing and other aerodynamic-based noises, as well as provides adequate communication to the back of the cone for acoustic suspension and proper operation.

The motor of the L2SE is paramount to the performance of the driver, providing for a flat and wide BL curve (as a learning note, BL is the equivalent of torque in a car; a car with a flat and constant torque curve provides much better acceleration and performance than a car with a peaky, non-constant torque curve). The BL curve is flat and extended, yielding 3mm of two-way linear excursion, resulting in the L2SE being able to accurately track the input signal. Reduced distortion and greater dynamics are the immediate sonic benefits. The motor of the L2SE includes an opposing double-stacked NdFeB magnet to improve restorative force, compliance, motor strength, displacement, and power handling. The magnet assemblies are fully surrounded by the voice coil.

The voice coil diameter of the L2SE is 16mm, which is the proper balance between size and moving mass in super high-end mobile audio midranges/ full-range drivers. The voice coil diameter serves several key functions: elevated power handling, dissipation of heat (thereby lowering power compression), and maximizing the size of the magnet assembly for enhanced motor compliance. The voice coil is high-purity aluminum, which is superior to copper for heat dissipation, as well as significantly reduced moving mass. The result is an extremely lightweight winding with good power handling and low inductance.

The inverted surround is butyl rubber which is highly consistent and does not suffer the variance of natural rubbers. This rubber surround terminates mechanical vibrations well, having a low stiffness for positive damping of resonances. The spider material was chosen for optimal performance; the spider is a 90/10 cotton/Nomex blend with single-dip low viscosity phenolic. This material provides the stiffness desired without being overly brittle or stiff, where vibrations in the spider are well damped and do not translate into the former or the cone.

Like other Legatia SE midrange designs, you will find no composite or metal cone materials used on the L2SE, as our approach to point-sourcing is to allow the Legatia SE midbass/midrange driver to effectively play into upper treble frequencies. The Legatia L2SE is a cone-type driver consisting of a proprietary hybrid paper diaphragm with extremely low moving mass. Paper is widely acknowledged as the best-damping material, as it provides the near optimum balance of strength and weight. The cone has been treated with a water-resistant element at the rear to accommodate door mounting, or other areas prone to occasional contact with liquid. The cone design offers a wide dispersion pattern to make for flexible installation and speaker location. The Legatia L2SE has an outstanding extended frequency response; the usable frequency range of this driver exceeds seven complete octaves of usable bandwidth on-axis (170 – 20k Hz). Even off-axis, the L2SE faithfully recreates more than five full octaves of information, for the ultimate “small-format” midrange/full-range driver.

The tinsel leads for the L2SE are terminated on one side of the voice coil. The tinsel leads are stitched into the spider and bonded directly to the former and brought out to the terminals, which completely eliminates tinsel lead slap and does not compromise the structural integrity of the cone.

The L2SE comes equipped with a phase plug pole piece extension at the center of the cone. The phase plug is aluminum and, by design, ensures enhancement of the total inductance profile, providing much of the inductance reduction benefits noted. The phase plug is plated with rose-tinted copper, which by design does not negatively reduce eddy current, and adds thermal dissipation potential, not to mention sleek, class-leading cosmetics. The phase plug extends well down inside the pole vent and acts as a very large and efficient heatsink for any heat that radiates into the pole. The highest frequencies of audio emanate from the area around the center of the cone and the lower frequencies are produced by the area of the cone that is farther from the center. The phase plug pole piece extension improves the L2SE’s performance and clarity by deflecting delicate midrange and treble tones forward of the driver while minimizing distortion and improving bandwidth.

The L2SE uses a copper shorting cup. The shorting cup consists of an optimally sized and placed copper (Cu) cup to create a total inductance profile that is not just low but flat over stroke, frequency, and power. Inductance is the number one limiter of high-frequency extension and modulation of inductance with stroke, frequency, and power, and is the primary source of intermodulation distortion.

The Legatia L2SE comes equipped with heavy-duty male slide terminals for both positive and negative to optimize contact, and give the end-user flexibility in tinned/soldered wire or female slide terminations.

Mechanical and electrical parameters are amenable to a variety of different installations and speaker locations. This driver is intended to be used in an infinite baffle configuration; a simple, solid baffle, solidly attached to the car’s chassis with available airspace at the rear of the baffle is all that is required for optimum operation. The size of the L2SE allows it to be mounted in typical “2-to-3-inch” midrange locations within a vehicle, or in custom locations at the discretion of the end-user, as long as there is adequate airspace behind the driver to allow it to maintain proper damping and acoustic suspension.